Fedora Strings was originally created by violinist Roger Stimson and cellist Joanna Borrett. Roger and Joanna worked together between 2011-2017. Their repertoire was almost exclusively their own arrangements, and these often included specialist string effects to maximise expressiveness and character. This website sells these arrangements  and you can view videos of five of them by clicking on the tab above.  Roger died in February 2022. A memorial cd of his arrangements and solo recordings is available and can be ordered by emailing info@fedorastrings.com 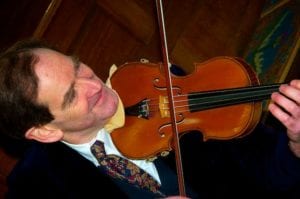 Roger studied violin at The Royal Academy of Music where he was awarded the Orchestral Prize. His orchestral work included Principal of the Welsh National Opera, Principal of Vienna Festival Ballet and Co-Principal of the Scottish Chamber Orchestra. During his long career Roger played in most of the major concert halls in the UK and toured in America, Canada, Quatar, Hong Kong, Istanbul and Norway.He was also solo violinist with the London Balalaika Ensemble. Roger had great enthusiasm for arranging and composing and his most recent composition was 17 songs for a children’s story he wrote himself called “The Quest for the Golden Orchid”. Roger’s violin and cello duets Lunchtime Blues and Tangerine Tango have both been recorded and can be bought here