More Play by Ear on the Cello Ideas

Here are some more ‘play by ear on the cello’ ideas for tunes in the straightforward keys of C, G or D major.

These tunes start on the third degree of the scale…
The following begin on the third degree of the scale: Mary had a Little Lamb, Merrily We Roll Along, Three Blind Mice, The First Nowell, In the Bleak Mid Winter, Let’s Twist Again,Go Tell it on the Mountain,  One Man Went to Mow, Ring a Ring of Roses, She’ll be Coming Round the Mountain, Swing Low Sweet Chariot,Deep River.

And these begin on the fifth…
Happy Birthday, Hark the Herald Angels Sing,Silent Night, Away in a Manger,O Little Town of Bethlehem,Jingle Bells, We Three Kings, We Wish You A Merry Christmas, Jolly Good Fellow Amazing Grace, Auld Lang Syne, the Gay Gordons, London’s Burning, London Bridge,Oranges and Lemons, This Old Man,What Shall We Do with the Drunken Sailor.

Ten minutes of playing by ear at the beginning  of each practice session can be fun and should make the process  easier fairly quickly.If you have suggestions or queries please comment on the blog and I will answer as soon as I can.

Play by Ear on the Cello

One way to boost your confidence and sense of relaxation with your instrument is learn to play by ear on the cello. This should seem obvious, but it’s surprising the number of cellists who are unable to do this and it is not part of traditional classical training. 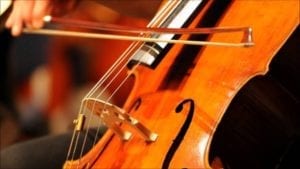 The freedom of playing by ear
I became especially aware of this a couple of years ago when I was spending New Year with friends in Ireland. At a small  gathering around an open fire people were telling ghost stories and one of the men started playing simple folk tunes on the banjo by heart very evocatively. He had only been learning the banjo  for a year and was able to do this in a relaxed way -and it struck me that so many classical musicians who had been learning for maybe decades and perhaps practising for hundreds of hours during that time would not be able to do the same.I don’t mean that the disciplined side of classical music, with its technical and musical demands, is unimportant; just that also being able to play by ear on the cello – any tune you love – can give a wonderful sense of freedom.

How to start
The easiest tunes are folk , nursery rhymes, hymns or carols. Many of these lie within one octave and have simple structures with repeats. Choose an easy cello key – C, G or D major – and start trying to work it out by ear and practise until you can remember the finger patterns.  Baa Baa Black Sheep, Row, Row, Row Your Boat, Frere Jacques, Humpty Dumpty, Twinkle Twinkle Little Star, Kum-ba-ya, Au Clair de la Lune, Tallis Canon,To Be a Pilgrim, Jerusalem, Scarborough Fair, Morning Has Broken, Lavender’s Blue, Good King Wenceslas, The Holly and the Ivy,O Come All Ye Faithful, Pop Goes the Weasel, Old Macdonald  and Lilliburlero all begin on the first note of the scale so are a good place to start.

You can find out more about our cello duet version of Lilliburlero here: