Jerome Kern Violin and Cello Duets
We are now selling Can’t Help Lovin’ Dat Man by Jerome Kern’s as a violin and cello duet in our online shop. It comes from the musical Showboat  which is still staged regularly today and is one of Jerome Kern’s most famous songs. Can’t Help Lovin’ Dat Man is one of  the main reasons for the show’s popularity and has a blues feel that combines with  romantic lyricism to make it very evocative.

Scene from a recent staging of Showboat

Jerome Kern’s sheet music is now out of copyright and today we have added five violin and cello duet arrangements of his music to our website.Love, in its many moods, is the theme for all but one of these songs; the exception is Pick Yourself Up – a delightful, confidence-boosting piece of positive thinking.You can buy the music at our shop by clicking here:
https://www.fedorastrings.com/shop/
Why this is a dream to play
From a string player’s point of view Kern’s music has great fluidity of line which makes it easy to phrase, and it also has a joyful sense of abandon which is ideal for romance. Jerome Kern himself, however, was very down to earth and declared himself nothing more than a “ musical clothier – I write music for the lyrics and situations in plays.”  Luckily for us  his classical training, craftsmanship and empathy for mood have ensured his music sounds as spontaneous and effortless today as it did 100 years ago.

We’re in the process of editing Jerome Kern violin and cello duets to sell in our online shop. The standard of the violin and cello duets is intermediate to advanced.The music will be added in around four weeks’ time. Jerome Kern’s music is now out of copyright and we can sell our versions of some of his most popular songs . These include Pick Yourself Up, Can’t Help Lovin’ Dat Man, I Won’t Dance, Long Ago and Far Away and Smoke Gets In Your Eyes. We’ve recorded all of these on our cd Moonlight and Music and they include ricochet bowing, col legno, slides and soaring melodies – many in the cello part. 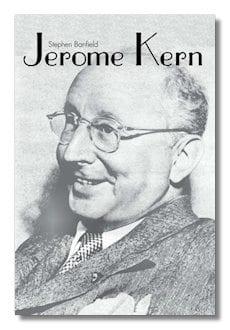 Jerome Kern was a small, enthusiastic man with a tremendous amount of nervous energy. He studied classical composition in Europe and America and had a more thorough technical and artistic background than many of his colleagues .
Despite being one of America’s best known composers of light music he was impressively modest. He once told an admirer: “The fact that the theatre going public likes my music is no credit to me. There are many other composers who write better music that the public doesn’t like.”

Jerome Kern’s natural feel for lyricism and his ability to express romantic sentiments made his songs instantly popular. Their lyrics are easy to empathise with.You can buy our versions of his songs below:
Broadway violin and cello duets