Today Roger and I have been rehearsing Eleanor Rigby string duet for a concert next week where we’ll be playing some arrangements  which are new to us. These include other Beatles’ songs like  Lucy in the Sky With Diamonds and Imagine. Although we both love classical music we’ve been enjoying the Beatles’ music we now have in our repertoire. Many of the songs  have long, lyrical lines which are ideal for the expressiveness of the violin and cello sound. My favourite is Yesterday but I also like the lightheartedness of  P.S. I Love You and Can’t Buy Me Love and  the dreaminess of Imagine. 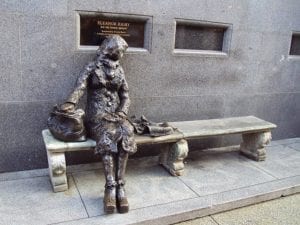 About Eleanor Rigby string duet
While rehearsing Eleanor Rigby I remembered noticing a statue of the same name when I was working in Liverpool a few years ago. It’s positioned on the side of a street in such a way that you almost think it’s a real person until you look more carefully. Who can’t identify with the searing loneliness that  affects so many people at some time in their life?   I think the music is successful in  creating the feeling of relentlessness and alienation that the words are  about and this arrangement of Roger’s has some tricky string crossing passages.